Tap to go to our mobile site

We recognize that the financial impact of COVID-19 means that many people may need to find ways to both save money by purchasing secondhand items or to earn extra income by selling gently used items.

For more information, go to used.ca/COVID19

Advanced Search
Back to Listings 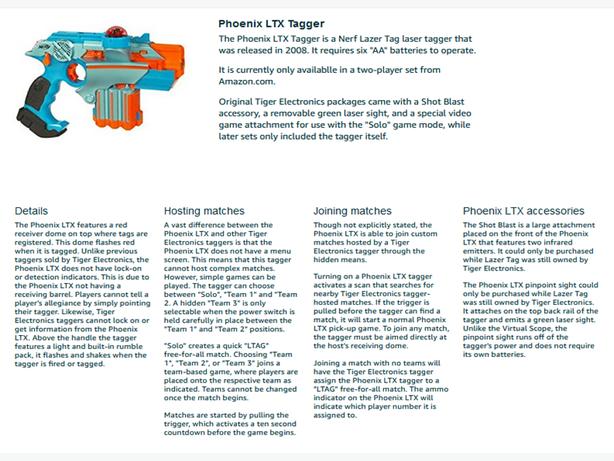 Addicting game for young and old...

Product Description
Tag or be tagged in this intense, real-life lazer combat game! Phoenix LTX taggers that register hits with lights, sounds and vibrations for thrilling minute-to-minute action! The rumble pack lets you know when you've been hit, while the recoil feature engages with every shot fired. Invite your friends to join you in multi-player modes
Details
The Phoenix LTX features a red receiver dome on top where tags are registered. This dome flashes red when it is tagged. Unlike previous taggers sold by Tiger Electronics, the Phoenix LTX does not have lock-on or detection indicators. This is due to the Phoenix LTX not having a receiving barrel. Players cannot tell a player's allegiance by simply pointing their tagger.

Lazer Swarm Command Center
The Lazer Swarm Command Center is a device that allows hosting Lazer Tag Team Ops (LTTO) games from a Windows computer.
The Command Center connects to the computer over USB and uses six high powered IR emitters and two IR receivers. It is compatible with all five models of Lazer Tag Team Ops taggers (Deluxe, IRT-2X Drone, Tag Master Blaster, Phoenix LTX, and LTAR).
At the end of the game, a scoreboard is shown with the team ranks, player ranks and scores, and a grid of how many times each player tagged each other player. The scoreboard shows players names so it's easy to see who tagged whom and how many times they tagged them. The scoreboard can be shown in a window or full screen on a second monitor.